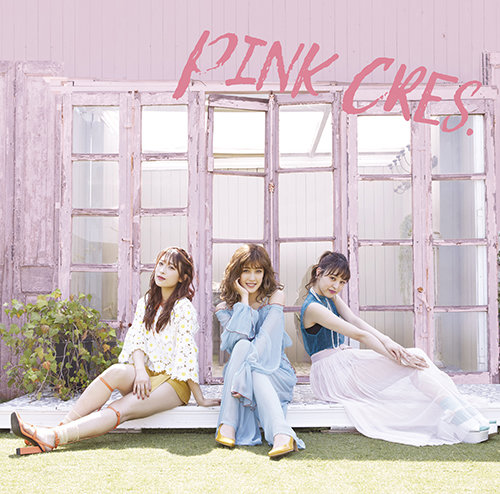 Links are all to live performances of the songs from their live from a few months ago. Sing to the sky is a cover, but the rest is new material.

Excellent. Their first album was too good to fly under so many radar's, but I fear its poor sales will relegate this one to the level of Econo that I expected of crescendo.

H!P groups don't have good album sales, I don't think anyone actually expects the Up Front groups to. That they got a second so soon means the company thinks they're doing well. Their album sold just a bit less than half what Up Up Girl's fourth album sold, and they release one almost every year.

Personally I have not been too interested into PINK CRES but their singles have been quite nice so far. Interesting to see some actual background dancers here.

Also I'm glad they're not going the v-u-den route of "Miyabi and the other two". I don't know the names of the other two girls but the one in the silver leggins is pretty cool.

I like the song, but other than Hikaru, this sort of hard-idol R&B doesn't fit this group's skill set at all. Yuuka is working the AutoTune ragged, and even Miyabi sounds unconvincing. Hikaru is a decent rapper, though.

I had no idea this was something she did, but she's definitely the star here. None of them are capable of the tight, purposeful choreo required to pull this off, either, and you really need all three of them hitting it hard and being on-point to make it go.

Yeah, they don't really sell the choreo for the most part LOL I'm also somewhat disappointed they didn't get them some cute backup dancers like real pop divas instead of old men haha.  The song isn't awful though.

After a few more views, I've decided that Miyabi is a hot mess here. Who gave her that ridic wet-look hair-do? Who didn't think something needed to done to fix it? A stylist and video director both looked at that un-wrung mop sitting atop her head and said, "yeah, that's the stuff!" The styling decisions for this group never cease to baffle me. I have a longer review up at the blog for those interested.

Maybe I'm just easy to please. I love all of it. LOL The dance, the video, the song. Their styling choices have always been a little odd, but this is what happens when you let talent (Miyabi) dress themselves.

I think Miyabi and Yuuka sound great, imo. OTL Yuuka has always been the standout for me in this group. I'm legitimately shocked by Hikaru's rapping, though. Up until this point, her many raps have been lamely talking to a track because she can't do much else. LOL But this is actually quite swaggy.

And it shouldn't be, if you ask me LOL all I can think when I look at it is what it must feel like to the touch.

I will never understand Miyabi's status as the fashion icon of H!P.  She follows trends but she does not follow them particularly well.

Yeah the mode look, layering, and baggy clothes? I’m not for it.

That wet-look probably looks good on some girls, but Miyabi ain't one of them.

Yeah the mode look, layering, and baggy clothes? I’m not for it.

Neither am I. It's just fancy homeless chic.

Miaybi's slightly slicked hair is very "fashion week"-esque, which matches the stage setting quite well. I really like it. And her makeup is great, in terms of Jpop idols. Now, the outfits.... Only Hikaru's is passable in my eyes. Yuuka's isn't that bad but I'm not crazy about those pieces together. And Miyabi's screams flashbacks of Otona na no yo--her hair/makeup would look x10 better if you saw it paired with a much more chic outfit... instead they went cheesy 80s print.

Overall, Hikaru is the visual star here for me, with Miyabi coming in second because of her outfit. Yuuka's whole look is un-impressionable, sans a very rememberable pair of silver leggings.

I know that Hikaru mostly raps for good reason lol but it sounds like her voice has improved a bit compared to their earlier songs!  She has a charming tone.  Hopefully she will continue to improve.

This song sounds so cheap and the vocals are oddly low in the mix.  This video seems much nicer than the other one though.

Full video for Bukiyou na Jibun is up: https://www.youtube....1&v=VWjBDJRFXlw

This is pretty much a Hikaru feature, which is a nice surprise, particularly because she makes the most of it. I had no idea she was this good of a singer, but she really does have a nice tone. The song is an off-the-shelf ballad, and the mixing really is odd at times. Like Farrah pointed out, the vocals are completely subsumed by the music in parts, mostly the end of the choruses, but Miyabi and Yuuka are both pushed back a bit too far even on their solo lines.

The video is pretty good for what this song is, and the girls all look great. Miyabi's hair is under control here, and everyone just looks more natural and at ease than they did in "Etcetera". Hikaru, especially, looks great. She's been the star of both of these songs and videos for me.

This song is definitely more their milieu, but I wish it were a bit more interesting musically.