As I am sadly broke (and hate torrents), I can't yet watch this concert, but the few clips of it I've seen have looked great!

I got my DVD copy of this concert in the mail yesterday and I proceeded to start watching it last night before going to bed while sipping brandy to help me sleep. Well, maybe it was the brandy, which I kept sipping, or the concert is simply as great as it seemed to be, but I couldn't sleep until I'd finished watching the whole two hours. I kept saying to myself, "This is the greatest thing they've done in ten years!" I thought every one of the girls was giving 120%. I love the variety of songs and the mix of recent ones, including some that were new to me, and classics. I love how they make the classics ("The Peace," "Souda We're Alive," "Sexy Boy," "I Wish," etc.) their own. I don't have a negative thing to say about any of the performers or the song selection. The costumes were great except for the opening number where they come out dressed like playing cards.

There were hardly any MC segments. The first long one comes in at the 28-minute mark and is all Sayumi, who talks off the top of her head the whole time and thoroughly delights the audience. Is there an American performer who can do that at a concert--without a teleprompter? The second one comes in 18 minutes later and it's all the girls and they seem to be having more fun than is humanly possible. I don't have to know what they're saying to enjoy it--although it would be nice. And there are surprise numbers by two other H!P acts! Luckily I didn't read the tracklist first. What a pleasant surprise and those acts were great!

This is the first H!P concert DVD I've seen since February. I will watch it again to see if it plays differently when I'm sober and then do a full writeup on my blog. Luckily I took today off from work because of a dental appointment.

Okay, yes, the brandy certainly helped with the euphoria. Watching it again this afternoon, it was a bit relentless, too much of a good thing. It didn't help that I was in a foul mood from going to the dentist and trying unsuccessfully to take a nap when I got home. It's a good concert, but there are too many high-energy numbers, often one right after another and I felt they should have had a little more musical variety, maybe a slower number or three. At one point I wanted to take a break and watch something else, but I forced myself to continue. It's a good one, but maybe not the best in ten years.

Also, I wish they'd hire a new camera and switching crew. They kept cutting away from some great dance moves. At one point, Erina does this acrobatic forward flip at the front of the stage, which would've been great if only we'd been able to see it. But the camera was a mile away! I had to reverse the action to determine who in fact had done the flip.

Oh, and the playing card costumes were much cuter this time around (it helped that I watched it the second time on my big screen TV rather than the 13-inch monitor I used last night), although they're not suitable for a dance number like "Wakuteka Take a Chance" where they hinder the girls' movements. Fortunately, after the OP sequence, they take them off and continue the song in much freer costumes. Also, they have these beautiful photos of each of the girls in the OP sequence but only a few of them are shown in closeup. Which struck me as a waste.

Idk why, but I really, really enjoyed that! Hahaha... I'm not sure, but I don't recall any other concerts ending like this?? =o

Thanks for the link for that nice ending ! Usually I skip them so I either don't recall an ending like that one ^^'.

My write-up on this concert is up on my blog.

Here's a shot from the MC segment where the girls are having way more fun than the rest of us: 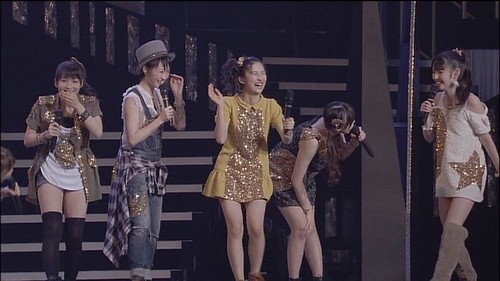 Can you recognize the guest stars (repping two different acts) in the background from this shot of MM doing "The Peace"? 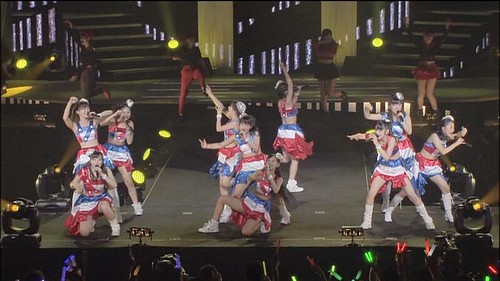 In another MC segment Sayumi brings them to tears: 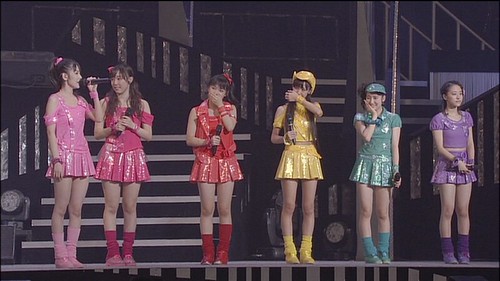 Madara. The trainees that participated were

Kaneko Rie, Hamaura Ayano, Taguchi Natsumi, Yamagishi Riko, Nomura Minami,  Ichioka Reina, and Kaga Kaede.
In the future, if you ever can't find something. Chances are it's up on the H!P Wiki.
UF announces, (probably on their website) which trainees will be participating at the beginning of the concert series.
For example. the Evolution concert has Yoshihashi Kurumi, Nomura Minami, Wada Sakurako, Inaba Manaka,Niinuma Kisora, and Danbara Ruru. Though they probably wont get mention in the DVD. (Tag that away for future reference. xD)

There were more KSS during the Budokan concert than the ones you mentioned. I'm not sure who all of them were, but Rikako and Murota Mizuki were there for sure.

Probably right. They never did update the Trainee news page on the last day. It only went up to the 24th.

Here's a shot that gives you a sense of how many Eggs there were in "The Peace" number: 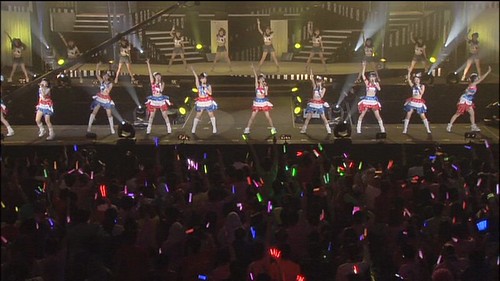 There's ten visible there, and I think that was it.

Here's a wider shot, where they're positioned between the two guest acts: 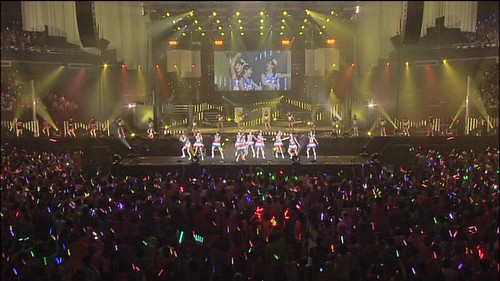 Alternate opening to Take Off Is Now-- In the DVD the singers of the song (Sayashi, Sakura and Ayumi) come in before this part and dance... but it seems in rehearsal that Suzuki, Maa-chan and Kuduu continue the opening until here =o