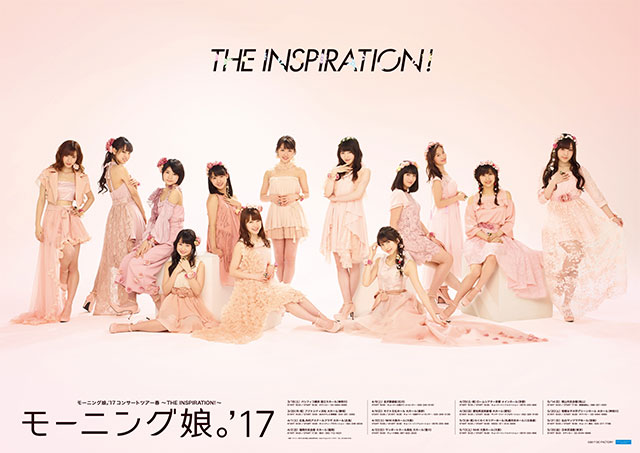 #9 is shaping up to be 13th gen with every other gen. I'm interested to see what the girls will do with Sakura.

I didn't word it well but the first show was Silver no Udedokei and the 2nd show was Give me Love..

I love that 13th gen is getting some love. Setlist is fine, could do without that dance performance medley though.

/edit: It's the first medley. RR21? Renai Hunter? Souda? OTT? Feels like they have this medley in every tour lol.

I love that 13th gen is getting some love. Setlist is fine, could do without that dance performance medley though.

/edit: It's the first medley. RR21? Renai Hunter? Souda? OTT? Feels like they have this medley in every tour lol.

Cause they pretty much do,sadly... Though hopefully new outfits and new people will make it bearable to watch again.

New song? Please give us an album... Though at this point, make it 2 discs. MM has like 3 songs that aren't on any albums yet that aren't B-sides lol

Yeah, them performing Wakacchanai again seems like a hint. Then again, how long have Country Girls performed their not released songs..?

The new song sounds okay, wouldn't say it's A-side material, but I prefer it over some recent A-sides. Here's a Youtube link btw.

Also interesting to see that they perform Sou Janai but not Mukidashi.

/EDIT: After listening to the concert rip, opinions on the sound:

Spoiler
BRAND NEW MORNING: Decent. Granted, the song is mostly shouting. Newbies are a bit shaky on their lines, but hey they're newbs.
1st medley: Too long. Some remixes were cool, the RR21-Renai Hunter was pretty annoying at some parts.
SONGS: Better than expected. There was some deep voice (Ayumi? Kaede?) that surprised me, it was pretty good.
Sou Janai: Same as always. Maria still sounds like she's dying. But to be honest, a lot do, especially towards the end.
Ai no Gundan: Same as always.
Watashi no Nanni mo Wakachannai: Masaki got a lot of lines and she sounded pretty bad in this. I'm a bit disappointed, she'd already cracked a few times in the previous songs. I thought with some rest (and voice lessons that she had gotten during her hiatus) she'd sound better.
Sexy Cat no Enzetsu: Same as always. It's decent since the ones that got the most lines the most constant in their performances.
Tokyo to Iu Katasumi: I hate that song. No objective judgement possible.
Silver no Udedokei: Mizuki and Yoko take the singing parts (I'd say Mizuki takes Reina's and Yoko Riho's parts), Kaede and Ikuta do the rap. Mizuki sounds decent. Yoko... shaky, a bit pressing it too much and bad breathing technique. Can't make out the rap parts.
JKM'17: Just gotta get my bias out: There's worlds between Haruna's first JKM during Ultra Smart and this one. Ayumi also sounded great. Masaki sounded bad. Ogata still has rhythm problems. They did the same thing with Miki as last time: Throw a random long ass English line in there lol. Maria sounded like she was dying. Akane too, she sounded like a really out of breath Kanon here. Kaede was decent, Yoko sounded better than in the songs before. I'm sorry I can't make out what their lines were about though. I think Ikuta talked about 9th gen.
Loving you forever: There were a lot of group/duet lines in the beginning. Sakura's first solo line sounded ok, when the others had their solos they were bad lol. The group lines sounded decent.
Morning Coffee: It sounded like it was the Misoshiru arrangement, but ... with Coffee.
2nd medley: How do you like Japan sounded powerful and fun. TOP! too, but you can't go wrong with the HDYLJ/TOP! combo. Wakuteka, well, pretty decent. I was pretty concerned about Masaki because she sounded like she was in pain - then again I always think she sounds like that. They did an interesting intro for Ikimasshoi. It was a deep voice that did the "Ano ko no ninki no hiketsu", I think it might have been Kaede. Another nice intro for Moonlight Night. Masaki did a really decent "Yuuki furishibotte". The intro to What is Love was quite rock-ish, that was cool. WiL was pretty good.
Seishun Say A-HA: As said before, it's okay. Not a-side material though.
Kimi no Kawari wa Iyashinai: Masaki took (most) Riho's lines. Pretty much a yell-fest but I don't want to point it out all the time..
Wagamama Ki no Mama Ai no Joke: They've performed this song so often I don't know what to expect from it. Basically the same as always. Masaki's last "Aisaretai" was neat. No growling or deep-forcing.
Inspiration!: It was... eh... I guess they pumped up the audience.
Jealousy Jealousy: Decent. Pretty much like they performed it on TV, apparently with Masaki? Haven't heard her. Miki sounded more confident here.
Bravo: You could hear that the girls were a bit tired, but they still tried.

In the end, the only one that can vocally carry is Sakura. Mizuki is decent, but simply too shaky herself to guide the other members. I'm somewhat impressed with Haruna and Ayumi, pretty disappointed with Masaki and 12th gen - aside from Miki, but to be honest I haven't heard much of Miki in this concert. But the audience seemed to like it so ¯\_(ツ)_/¯

Where is Suki na Senpai? Is 13th gen the first gen not to sign it? (except for the 7th/11th gen&Aika)

Where is Suki na Senpai? Is 13th gen the first gen not to sign it?

"Brand New Morning".
More seriously, they may want them to be 4 to sing it.

I'm curious what Tsunku has to say about Kaga and Yokoyama. But mostly about Kaga.

I'm going to watch this only for the 2nd medley, the 2 new songs and Joshi Kashimashi honestly... of all the old songs they have, they keep using 1·2·3, Wagamama/Gundan and Help me!!

... If they're gonna keep using colorful era songs everytime at least they could shuffle them more often with Brainstorming, Kimi Sae, Password is 0, Tokisora, Egao no, even TIKI BUN but not the same songs every damn concert.

besides TOP, Ikkimashoi and Loving you forever, the other old songs were also recently used in concerts for the last years right? (Morning Coffee doesn't count)

At least it's not Love Machine and Resonant Blue anymore.

Where is Suki na Senpai? Is 13th gen the first gen not to sign it? (except for the 7th/11th gen&Aika)

It might be in the B setlist. If LinLin and JunJun did it, they'll let them do it too.

my main problem with the setlist here is, with the lack of old song and the oversaturation of colorful era songs, I know Kaede and Yokoyama are going to get shit besides BNM and the performances where they sing with other generation.

If there were songs like AFOD or Ai araba it's alright, you could expect 13ki and even 12ki to get some solos. But with the new ones? you know the same 4 girls are going to cover Riho and Kanon 100%

You'd expect it but that doesn't mean it would happen. Even 9th gen were glorified backup dancers for most of their first concert and they were the first new girls in ages.

That new song has a really awesome intro and instrumental but they lost me with the singing. It's kind of like EDM mixed with something the 2009 lineup would have released for those not willing to make a nico account to listen. I like the Say A-HA part, but otherwise it's mediocre. I wouldn't spend money on it.

Yupp, it's mostly Mizuki, Masaki and Sakura that got Riho's lines. Every now and then one goes to Ayumi. Ogata barely got anything at all. The rest of 12ki get a few lines in Loving you forever, Inspiration and Ikimasshoi.

13ki get their "everybody things with you" corner at least. It's #9 on the setlist:

I find that Ayumi actually tends to get a ton of lines but nobody notices until the actual video comes out. I sometimes see people lumping her in with the girls who got shafted line-wise and I often wonder if they're watching the same MM that I am.

By the '4 same girls' I meant the 3 mentioned by DonJuan and Haruka!

I don't know if you mean Ayumi getting lines in concerts or in singles too. I can't talk about concerts because the last one I watched was Give me more love and it was only the streamed version. For Ayumi I agree she sometimes gets as much lines as Kudo but to me it always feels more like Kudo is always above.

Ogata does not deserve lines.

Typically Ayumi gets more lines than Kudo in concerts, I'd say. Especially if you're performing One Two Three and HOW DO YOU LIKE JAPAN.

Ayumi gets far, far, far more lines than she deserves to be honest LOL.  She and Erina are the driving forces behind me avoiding live MM performances.

I have many thoughts on the performance of BNM and Maa-chan's return, but for the moment the main thing I thought while watching the BNM Inspiratin video was...... I want to see this concert so bad. And that's such a good thing.

Both Fukumura Mizuki and Oda Sakura caught a fever the other day and were diagnosed with influenza. They will miss this weekend's Morning Musume. '17 concert in Osaka (5/13) and Okayama (5/13).
http://www.helloproject.com/news/7000/

Wonder who will stand in? I'm surprised they didn't cancel the concerts. They're like 75% of vocals!

Both Fukumura Mizuki and Oda Sakura caught a fever the other day and were diagnosed with influenza. They will miss this weekend's Morning Musume. '17 concert in Osaka (5/13) and Okayama (5/13).
http://www.helloproject.com/news/7000/

Wonder who will stand in? I'm surprised they didn't cancel the concerts. They're like 75% of vocals!

Wooooow, that's gotta be the biggest panic the MM staff has been in since Riho told them she was graduating llolol

I hope we get some report of the concert. Really curious how the other girls are going to step up or not step up...

I hope we get some report of the concert. Really curious how the other girls are going to step up or not step up...

Yeah, or that with it being as odd a concert as it will be that someone will just straight up record it. It'd be worth it, either way.

While I'm sad because Sakura. I'm just too damn curious to hear who takes over and what the concert will sound like. This is a big moment for the other girls to finally step it up. Good ol Eminem song comes to mind.

I'm hoping for Duu & Miki (and Maa) to stand in. Please no more Ayumi and Erina, I've already (more than) enough of them.