With updated photos, so you slacking fans who haven't managed to memorize the bajillion new girls' faces can just go by who you think is cuter. Feel free to post results/complain about how you don't know who half of these people are.

It does not include Fukuda Kanon, so you'll have to manually throw her in if she's that important to you.

Here are my results (I am absolutely not biased towards a certain group whatsoever):

From Chisato on things get crazy because a lot of H!P was boring as hell this year. It gets even more jacked up from beyond this point so I'll just skip to the bottom five. A lot of new girls ranked super low by virtue of not having done much and having super awkward photos.

My last was Aika (second last was Momoko ahaha) , I don't dislike her as much as I used to and I really respect her learning English and reporting so well for Up Front but I just like other members better.

I still call Zukki my MM oshi but it's not surprising Mizuki ranks higher I've been realllly loving her lately.

Mine.... I feel like Riho is too low (it only showed her a couple of times though, sigh...), but the rest I can see. There's some things that surprise yet don't surprise me, like Murotan beating out Kananan as my favorite in ANGERME, but while there's SOME parts I'm a tiny bit iff on, the majority is pretty accurate, I think. I only used the "draw" button for the rest of the Tsubaki members + H!P people I don't like since they're all the same to me, lol.

Ahhh, these are usually right, but this time it seems wholly inaccurate.

First of all this was the hardest matchup I got:

Second of all, mine is pretty damn accurate.  Up until 36, then it is like ok Tsubaki and Country Girls who I don't care about, and then my solid bottom six hahaha Only weird intergroup discrepancy I see is that I rank Rena above Ayapan in Kobushi, but close enough

I don't know why but it makes me kind of sad how low MaiMai is slipping in my rankings though...maybe because she was my first favorite H!P kid so I feel like a traitor haha

Wow, look at that ANGERME representation in my top ten.

I don't know what it is I just cannot stand her.

I loved Riho the very day I set eyes on her in 2012. She automatically became a permanent fixture as #1 idol of all time. I loved her more than MM itself. Slowly, my liking for Haruka grew. In 2014 I started to buy her goods, and she started to barely reach the same level of Riho in 2012. She was steadily growing, and I bought more of her stuff. Ls, trading cards, magazine clippings, a towel. I liked her as the companion to my Riho love. Then Riho announced her graduation two months ago. Within the first month I was like "At least I have Duu," but then at the turning point, in the last few weeks, I've become disgusted with her, wondering why I ever liked her or thought she was pretty, and I avoid looking at her, like I avoid the rest (but a little bit more). One reason is this girly thing she's starting now, and because they're pushing her to become one of the next centers, and fill the hole that to me should never be filled. So no, I don't like Kudou anymore. I was about to throw away everything I had accumulated but my mother saved it by taking it. And my friend took the one towel.

TL;DR Without Riho, she's shit to me. (Like almost all of MM)

But thanks for noticing and caring, I appreciate it.

I have Angerme bias as well. For the most part, I don't know how accurate the middle rankings are. But the ending rankings are accurate. Aika doesn't do anything and Tsubaki Factory has yet to do something good.

Well I did mine. As always I gave up trying halfway through and started selecting "tie" for most of them. Oh well.

15. Sayashi Riho (I feel like she should be a little higher)

Pretty accurate, no complaints here. I don't think Kudo is actually that high but whatevs, lol.  You guys aren't alone in your dislike of Fujii btw, hahahaha.

I think I overused the tie button, so I redid it, and only used it thrice.

This one is a lot more accurate.

Instead of writing all the names I thought it would be a lot easier taking to screencaps so my top is:

(I want to add Maro, she would be between Sakura and Ayano) 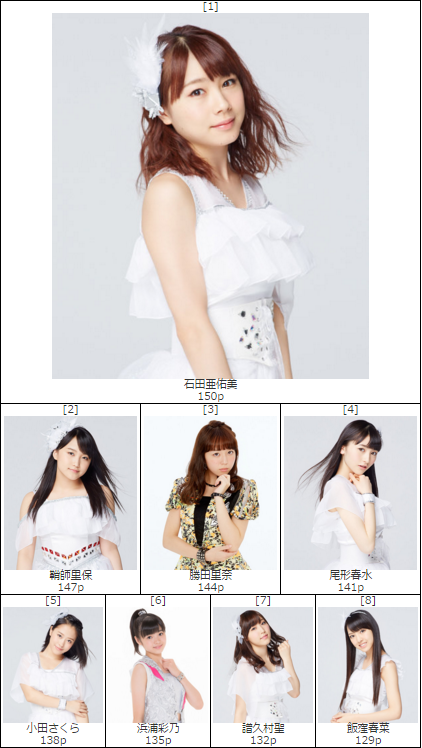 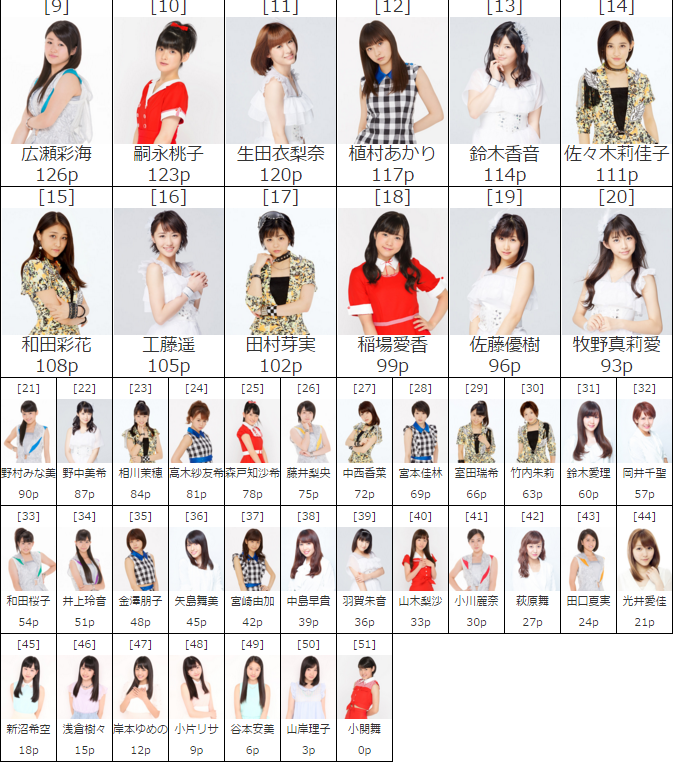 TL;DR Without Riho, she's shit to me. (Like almost all of MM)

This is really harsh dude. When I saw MM she stood out to me and I think she actually shot up in my rankings. I don't know what would make you dislike a member this hard when they haven't really changed at all? Give her another shot she's still the same ol Duu

She has changed, actually. But besides that, I just don't like current era MM anymore, it's not like it's anything personal. It's only hitting her the hardest, most noticeably, because she was my next favorite.

One day you guys will accept Rio as the goddess she is, until then I'll keep that bundle of cuteness to myself.

^If thats the reaction you got for that, I really should keep my opinions of Kanon to myself lol. I know what you mean though, sometimes they are nicer in pairs, I would probably stop liking Kumai if Maasa graduated before her.

That whole line of thinking is alien to me, and incredibly off-putting.

Is this the way wota think??

Not necessarily, it's more or less like a personality test or organizer. No one bases their favorites on it, they just want to see how their favorites stack up in comparison to other girls in their personal pool.

I also re-did mine since I think I made the same mistake as Thea. I think I tied once,

This seems a lot more accurate.

^^It's common in Japan to have one girl as your favorite way above the rest but even most of them seem to just move to another girl once someone is gone, which is why just one person leaving never really seems to affect sales that much. I highly doubt most of them feel THAT strongly about Riho. They'll just get a new favorite and life will go on.

Sorry, Kakumei, I was referring to Thea's posts on Haruka; I should've quoted her to be clearer.

^^It's common in Japan to have one girl as your favorite way above the rest but even most of them seem to just move to another girl once someone is gone, which is why just one person leaving never really seems to affect sales that much. I highly doubt most of them feel THAT strongly about Riho. They'll just get a new favorite and life will go on.

Even so, I remember pictures of Fujimoto Miki CDs all shattered with "Congratulations on you marriage" scribbled over them or something right after that whole "scandal," and I guess I just wonder if those types of fans are more common than I'd like to believe. It seems to involve a really personal level of rage regarding the idols, and it strikes me as very odd to put it simply.

I'm going to compare mine to earlier this year before I knew any of the new girls.

At this point I forget how to spell everyone's names/ I don't care as much.

No, not really. I think there are a number of fans that feel this way, but not so many that it affects sales, or is even really noticeable.But I seem to recall that a lot of fans quit/dropped out when Sayu graduated, right? That were her fans from the very beginning? So I think it's akin to that. It's just that mine lasted 5 years instead of 11.

I'm one of them too lol, I really, really dislike Morning Musume (at first I just didn't have interest in them, but the obligatory support is getting to me lol), I stick around for Kanon, once she is gone, I am gone. I like the girls, but I'm not attached to them at all, and I don't like their music or choreography. I skipped out on the New York concert just because I expected Kanon to not get a lot of spotlight.

Without Riho, I'm stoked to see Kudo have even more space to grow. Her big opportunity has arrived.

Even so, I remember pictures of Fujimoto Miki CDs all shattered with "Congratulations on you marriage" scribbled over them or something right after that whole "scandal," and I guess I just wonder if those types of fans are more common than I'd like to believe. It seems to involve a really personal level of rage regarding the idols, and it strikes me as very odd to put it simply.

Scandals are betrayment to fans, they have the right to be frustrated. Mikitti's wotas were pretty hardcore, I would expect more than shattered CDs.

Here's my ranking, I'm pretty much a shitty DD so it's just an indicator of girls I like a little more than the others, but I don't have oshis.

Dang, I thought this was the song ranking XD