Looks like S/m 2nd gen joined in 2011, and their first appearance was on the 7th single "Tachiagirl" but as "sub-members." They were full members by the 8th single.

<blockquote class="ipsBlockquote" data-author="Myst" data-cid="221670" data-time="1611219373"><blockquote class="ipsBlockquote" data-author="JPope" data-cid="221667" data-time="1611201221">
My guess is that Tsubaki's n00bs will be called 2nd Gen, with the idea that anyone who was a member at their major debut is 1st gen, and anything that happened pre-major debut was just tweaking.</blockquote>I honestly can't remember how many or when S/mileage debuted 2nd gen... Was it after their debut?</blockquote>


It was after their debut. IIRC, the audition for the 2nd gen was announced to everyone (including the girls) at the celebration of their 1st anniversary since debuting. I always thought it was a dick move.
Top

You don't need to understand Japanese to get that Riai is not pleased with the announcement of J=J new member auditions.

Ooooh girl ^^; I mean, fair, I understand. She had the biggest chance to become the next main singer behind the original members and now they might add someone even better.
Check out who has too many opinions on Hello! Blogging!
Hello! Project age overview
Hello! Project photobook overview
Top

They took their time, but the next Premier Seat has finally been announced: Juice=Juice Premium will air on January 29.
Check out who has too many opinions on Hello! Blogging!
Hello! Project age overview
Hello! Project photobook overview
Top

[quote="DonJuan"]
Kamikokuryo Moe will once again be McDonalds' McFlurry campaign girl. Apparently she will sing a special song for the campaign, too ("McFlurry nandedarou",「マックフルーリーなんでだろう」).
This time they're promoting not only the KitKat McFlurry, but also an Oreo McFlurry (Red McFlurry and Blue McFlurry), and the joke is "Both go?!" (「どっちも、いっちゃう!?」, Docchimo, Icchau?!"). 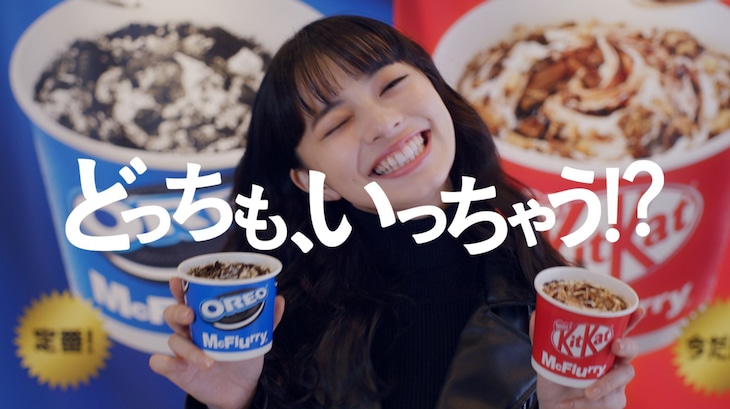 Just googled a bit, and the song might be a parody on Tetsu and Tomo's Nandedarou. That's just my guess though. Seems to be a popular thing, I remember Gaki parodying it for some New Years sketch yeeeaaars ago.
Edit: Oh right, the song will drop on January 27.
[/quote]
Short CM version
Long version from the McDonald's channel

Moe is so incredibly cute... and I'm happy to see H!P girls getting CM deals.
Check out who has too many opinions on Hello! Blogging!
Hello! Project age overview
Hello! Project photobook overview
Top

Nice to see duets/small groups came back, sad to see Suki tte Itte yo didn't make it (or at least didn't make the broadcast cut).

/EDIT: And here's the performance on Bilibili.
Last edited by DonJuan on Sat Jan 30, 2021 8:31 am, edited 1 time in total.
Check out who has too many opinions on Hello! Blogging!
Hello! Project age overview
Hello! Project photobook overview
Top

The small units were the highlight for me, because after the BYNDS set, this kinda felt a bit listless in terms of energy. Everyone sounds great, but there are a lot of moments where some of them seem bored. Riai in particular seems preoccupied and out of it, and coupled with the audition announcement video, it makes me wonder if she's going through some personal shit.

Watching this it occurred to me that, if the remaining original members all graduated tomorrow, the remaining five would make for a decent analogue of the original group:

I'll give Riai the benefit of the doubt to grow in terms of performance energy since she simply is one of the youngest members in H!P (older only than Anju's Hashi-Rin and Wakana), but yeah, she's probably a bit worried at the moment. In a follow-up post she said that she worries if she's ready to become a senpai and stuff. Yume, on the other hand, is a bit too hectic. The two really are complete opposites. But that makes for a cute generation. In terms of singing: I'm not sure if Yume will surprass Riai, but if there's any group that will push you vocals-wise it's gonna be Juice=Juice. I'm sure both will become at least good to better singers by H!P standards.

In general though, yes, that was very low energy. I think we talked about that when Karin graduated, too - at that point they aired the Anju Premium, and we had the direct comparison to Funakki's graduation, too.
For Juice I feel they're willingly going a more mature direction, especially with the latest single, but also with the setlist. Maybe they were just off, though.

I did like Rei though. During the last member ranking I mentioned not feeling her in Juice=Juice, but her voice actually gives a nice contrast while not being too different.
Check out who has too many opinions on Hello! Blogging!
Hello! Project age overview
Hello! Project photobook overview
Top

<div>Rei=Rei has been even better than I thought she'd be, and I was high on the idea of her joining J=J from the start. I think she sounds better than ever, which might just be a case of her being better suited to J=J's material. It seems like she's getting more face time, too, although that might just be me paying closer attention to her since she changed groups.</div>
<div> </div>
<div>I hope this single is an outlier, because they're about to get even younger with the new addition(s). If they're going mature because they want Kanatomo and Sayubee to stick around longer, I'd honestly rather they just graduate. J=J needs to stay funky. As much as I like "Downtown," it's an odd track for a single, especially when it's coupled with a power ballad like "Ganbarenai yo." I wish they had balanced it better like how Angerme did with their "Ai Sae Areba Nanni mo Iranai" / "Namida Iro no Ketsui" single. </div>
<div> </div>
<div>I'm confident that Riai will regain her footing and be fine for the future, but she's definitely in a funk right now.  Yume's improving bit by bit, too, and I think they'll both be important cogs in a couple of years.</div>

I certainly do hope this single is going to be an outlier. Ballads can be great, but they're not exactly idol-friendly. Especially considering they always depend on the singers, and Juice has already joined the generational groups.
On that note, I didn't really miss Karin here. However, I wonder what happens once Sayuki leaves the group. Karin doesn't really have WHAM lines, but Sayuki? Magic of Love won't be the same, and several others neither. Sure, Ruru might get close in terms of singing talent, but their voices are very different. You can't hope for a second Sayuki joining the group. Riai also seems to do better at lower notes. Manaka could do high, but as great as she is, she's not the songstress that Sayuki is.
Check out who has too many opinions on Hello! Blogging!
Hello! Project age overview
Hello! Project photobook overview
Top

When Sayuki graduates, Ruru will get every one of her glory lines. There is literally no one else available to do them justice, and while Ruru is different than Sayubee, she's capable of pulling them off and making them her own. Manaka is capable of handling Karin's parts in general, although she's the same age as Sayuki, so who knows how long she's going to stick around.

To wrap it all up Morning Musume will be the star of the next Premier Seat show, airing February 26.

I wonder if they perform a new song from the album.
Check out who has too many opinions on Hello! Blogging!
Hello! Project age overview
Hello! Project photobook overview
Top

I know Mizuki and Yokoyan were in quarantine for a few days butnot confirmed with Corona, so is Mao the first actual case in H!P?
Top

Psst, check this out:

I’m pretty sure she is. I’m aware of a fair amount of idols who have gotten it now but I don’t think any of them have been from Hello! Project
Top

^^ Sweet new stuff! Gonna find out how to do it on mobile, but will definitely try it.

^ Yeah, that's what I thought. UF-wide we had Tanaka Reina at least.
*and UUG's Aoyagi Yume.
Top

The same as on desktop, just wrap the link in [media][/media] tags.

Or select the link and click/tap the little screen button in the editor window to do the same without typing.

(Idk if it's just for me, it says "loading tweet" here. Describing the tweet:
A concert has been cancelled because Tsubaki Factory member Runo Yofu has tested positive for COVID-19 using an antigen test. The "Hello! Project 2022 Winter LOVE & PEACE" concert was to be held on January 23, the day of cancellation, in Aichi prefecture. http://helloproject.com/news/14089/)

I'm surprised they go so far and cancel the whole thing. They didn't do it when Mao got Corona.
Top

Fukumura Mizuki also has tested positive for Covid on an antigen test.

UF canceled their live appearance on NHK's Utacon that was supposed to take place out of precautions.
(I hope they will get invited back!

)
Also, since Mizuki was a guest yesterday at Ogata Risa's "bon voyage!" show with Ogata Risa, Bitter & Sweet, Miyamoto Karin AND Yonemura Kirara, Kubota Nanami from OCHA NORMA. That show got canceled too. The girls all tested negative but again, out of precautions the next show was canceled.

Rona has officially hit UF hardcore. I hope this is it, but I have a feeling if they don't nip this it's going to get worse so UF better go into full damage control. But it also makes me wonder how often the girls in H!P get tested?

Probably daily, or at least a few times a week.

I guess at this point it's only a matter of how fast Corona will spread. Japan's numbers are still a lot lower than where I live, but it feels like everybody gets it nowadays. Hopefully everybody will have light symptoms.
Top


They canceled the H!P concerts for this weekend.
Kishimoto Yumeno, Akiyama Mao, and Fukuda Marine FC event was also canceled as a precaution.

So far it seems to be contained to only Morning Musume, Tsubaki Factory and OCHA NORMA. Hopefully ANGERME, BEYOOOOONDS and Juice=Juice can keep clear of this.

Really hope so for Beyooooonds considering they're starting their single promotions soon.
Top 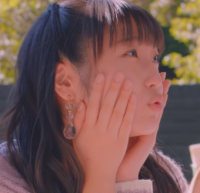 Omicron is spreading like crazy, I doubt any group in H!P will stay in the clear for any length of time…
Top

I'm surprised we haven't heard anything anymore, but then again they just cancelled the latest concerts.
Ami still has pretty bad symptoms, like a big damn cold and no sense of taste.
Top

Shoujo Q dropped this in the shoutbox, but I think it's significant enough to warrant a post in the forum. Takui Nakajima will be leaving J.P ROOM Co and Up-Front Group to start his own independent company, effective March 31. Here's the official statement, for which the Google translation is surprisingly understandable.

This is a huge loss for H!P. He and Hoshibe Sho have been the creative backbone of the company since Tsunku stepped down as Producer. Will be interesting to see if Hoshibe takes on an even larger role or if they look to bring on a new writer.

While I’m sad that he’s leaving the company. It will be nice to see to potentially get more solo works as those slowed down a lot ever since he started writing for the groups.

It does make me wonder if we’re going to see even more of a slow down with more releases with H!P themselves since they’d be down a core songwriter.
Formerly Mizura
Top

^That would be worst case. I hope they get him to write some songs for them even outside their company.
In general, ugh, enormous loss. Takui gave H!P some bangers.
Top
Post Reply
784 posts